(CNN)The German parliament has passed a symbolic resolution recognizing the 1915 massacre of Armenians by Ottoman forces as a “genocide.”

The resolution was passed with a “striking majority” said President of the German Bundestag Norbert Lammert, with only one politician voting against it and one abstaining.
Between 600,000 and 1.5 million Armenians, and other minorities, are estimated to have been killed by what was then-Ottoman Turkey during World War One.
Turkey has always rejected the term “genocide,” saying there was no systematic attempt to destroy a people.
Eight things to know about the Armenian mass killings
Many Turks also view the Armenians as having been a threat to the Ottoman Empire in a time of war, arguing that people of various ethnicities — including Turks — were killed during the violence. Some Turkish leaders also fear a genocide acknowledgment could lead to demands for huge reparations.
Meanwhile, some Armenians feel their nationhood cannot be fully recognized unless the extent of the killings of their ancestors is acknowledged.

German politicians raise their hands in favor of the resolution.
Turkey has now recalled its ambassador to Germany, in response to the resolution.
Turkey’s Deputy Prime Minister Numan Kurtulmus tweeted: “It is a historic mistake for the German Parliament to accept some ‘distorted and unfounded’ allegations as ‘genocide.’
Why Turkey won’t say the ‘G-word’ when it comes to Armenians
“German Parliament accepting this resolution is unbecoming of the friendship between Turkey and Germany,” he continued.
“This issue is one that needs to be resolved by people of science and historians, not one to be solved by politicians of parliaments.”
New strain on Germany-Turkey relationship?
Germany’s resolution is likely to place a strain on relations between Berlin and Ankara, and follows a recent migrant deal between Turkey and the European Union, in which Germany plays a central role.
Under the deal, for every Syrian refugee returned to Turkey from Greece, a Syrian refugee in Turkey is resettled in the EU. Turkey also agreed to take measures to prevent routes for migration opening from that country to the EU.
In turn, the EU could potentially lift its visa requirements for Turkish citizens by the end of June 2016.

A visitor wars the Armenian flag during the parliament vote. 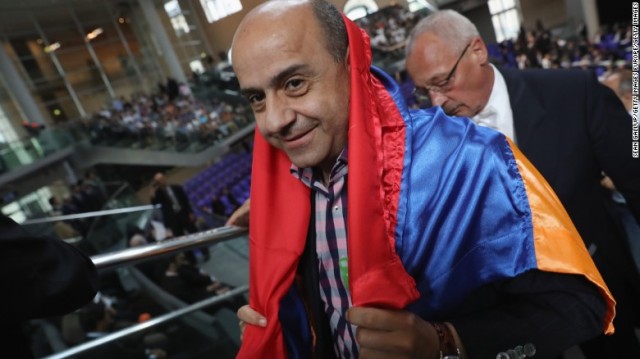 The EU may also speed up the payment of 3 billion euros ($3.3 billion) to Turkey to help it deal with the refugee crisis, with potentially billions more on the table.
Turkey, which borders both Syria and Europe, is already host to 2.6 million migrants.
EU migrant deal: How will it actually work?
The French precedent
What could the fall-out from Germany’s genocide resolution look like?
When France passed legislation recognizing the Armenian genocide in 2011, Turkey promptly recalled its ambassador to the country and froze military cooperation between the countries.
The ambassador returned the following year, and the election of French President Francois Hollande in 2012 helped usher in a new era of cooperation between the countries.
Who uses the G-word?
As of last year, more than 20 countries around the world have officially recognized the killings of 1915 as a genocide, according to the Armenian National Assembly. These include France, Canada and Russia.
Among the countries which do not call the atrocities a genocide are the United States and Britain.
Why Obama won’t say ‘Armenian Genocide’

Armenian clergy men and activists hold up signs saying &quot;thank-you&quot; after the vote.
Armenian clergy men and activists hold up signs saying “thank-you” after the vote.
While a U.N. subcommittee called the killings genocide in 1985, current U.N. Secretary-General Ban Ki-moon declines to use the term.
In April, Pope Francis referred to the massacre as “the first genocide of the 20th century” — a claim which Turkish President Recep Tayyip Erdogan described as “nonsense,” recalling his country’s ambassador to the Vatican.
In 2014 Erdogan offered his condolences for the mass killings, which he said had “inhumane consequences” — though the Turkish leader stopped short of using the term “genocide.”