Move follows standoff in capital Yerevan between police and armed men, and could pave way for a coalition government

Hovik Abrahamyan said he was stepping down as prime minister to ‘give a chance’ to a new government, following recent protests. Photograph: CTK/Alamy

The prime minister of Armenia has announced his resignation following weeks of civil unrest and a sharp economic downturn.

Hovik Abrahamyan told a cabinet meeting on Thursday that the country needs “new approaches and a new beginning,” and his departure should lead the way towards a coalition government.

Last month, Armenia’s president, Serzh Sargsyan, promised to create a government of national accord after a two-week standoff at a police compound in the capital, Yerevan, which left two police officers dead and shook the nation.

Several dozen armed men stormed the building and demanded the release of Zhirair Sefilyan, the leader of the New Armenia Public Salvation Front opposition group, who was arrested in June on suspicion of preparing to seize government buildings and telecoms facilities in Yerevan.

The standoff galvanised Armenia’s protest movement, triggering rallies in support of the gunmen and further clashes with police.

In recent months, there has been a flare-up of violence in Azerbaijan’s breakaway Nagorno-Karabakh region. Karabakh is technically part of Azerbaijan, but it has been run by an ethnic Armenian government since the collapse of the Soviet Union. In April, the worst clashes since a 1994 ceasefire broke out between Armenia and Azerbaijan. 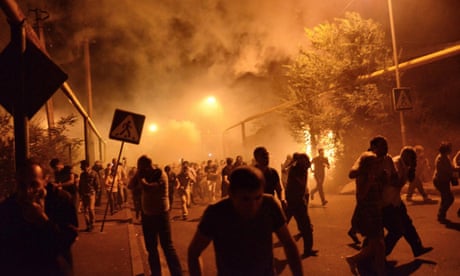 Barricades, clashes, and a white dog: two weeks of protest in Armenia’s capital

In comments reported by Russian news agencies, Abrahamyan said he was stepping down in order to “give a chance to a new government,” which would offer “new approaches in order to consolidate society”.

However, it was not clear from his statement who would lead the government.

Political analysts in Armenia have named the former mayor of Yerevan Karen Karapetyan, a top executive at Russian gas company Gazprom, as the likeliest successor to Abrahamyan.